A Kickstarter Video is Not For the Faint of Heart

At CLAi we get the opportunity to work with many different types of people and projects – it is one of the perks of the Film & Video industry. We never know where the next job will come from, or who might be on the other end of the phone, we just have to treat every contact like the next Spielberg or Apple.

Funnily enough, one of our more interesting clients this year came to us from Yelp, of all places, and happened to be right here in Santa Cruz – which never happens!

The start-up toy company, ThoughtFull Toys, called asking if we could do a Kickstarter video for them. A well established toy inventor and a toy designer had started a new company and wanted to launch their new line of toy cars on Kickstarter in the hopes of gaining financial backing from crowd funding rather than the small number of traditional investors.

When we started the project we did a great deal of research, knowing that a Kickstarter campaign does not usually follow the same rules as traditional marketing. Kickstarter suggests making a video that is no more than 2 minutes, introduces the key members of the project and clearly explains the rewards of the Kickstarter campaign. However! Upon further investigation it became clear that these ground rules were set up for the “average” campaign – but anyone who has visited Kickstarter knows, the “average” campaigns are lucky to meet their goals. It’s the outrageous, creative, brilliant and eye catching campaigns that walk away with 1012% of what they were asking for. In reality, what we found out was, the high earning videos averaged around 4 minutes, were extremely creative, of good quality and, more than anything, they exuded personality – making you want to see the product on the market.

To create a compelling, creative video, on a very fixed budget, that explains the product (when you may or may not have the actual product to show yet) and introduces the team in a trustworthy and likable way. We found one of the trickiest parts of writing a concept on these terms to be finding a way to show that our clients were business people, with the enough experience and knowledge to make investing a low risk factor – but not make it look so over produced that it looks like they already have plenty of money. On top of all this you have to put the brains behind the idea on camera and portray them in a way the audience trust them – for us that meant putting two guys, who never would have had an online video presence for any reason, under lights, in front of multiple cameras, delivering lines, and make them look good.

Our answer was to take all of our experience on commercial and advertising videos and to apply it with a twist: creating a concept that was just as quirky as the client and as innovative as their product. The goal for ThoughtFull Toys was to make their Kickstarter viewer empathize as a grown-up-kid enough to want a toy of their own and to donate money. Plus, the beauty of a well designed video is to be able to tweak it a little bit, and be able to use it in multiple facets – for a Kickstarter video if you can eventually remove the “Kickstarter Campaign” info, it can become the perfect business intro video for the website.

What came out of the experience was an extremely quirky video filled with grown-up-kids, real kids, some beautiful shots of the prototype toys, and as much information as we could fit into a 4 minute Kickstarter video. We had to cheat our way around a few problems to stay within budget (who says you can’t create a concept that lights toy cars with 4 LED flashlights and a disco ball?) and get creative with the editing (cropping in on 5K footage saves bad takes when you can cut between a wide and a cropped shot). It was a video production that wasn’t for the faint of heart, but who says corporate videos have to be predictable? This video may not be what your traditional $2 million investor wants to see, but then again, the world is changing, and your $2 million investor may be 28 and wearing hoodies as business attire. It is worth spicing things up, trying something new and more importantly bringing the creative back into the corporate world of video. 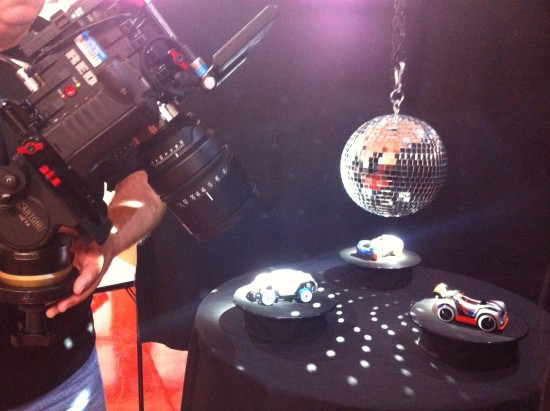